Transportation Around the world

It appears that transportation would soon look different after Tesla revealed its intention to enable full self-driving features in August. The move is part of the company’s long-term plans to make autonomous vehicles an essential part of the transport network. This, it believes will increase safety and reduce automotive fatalities, as the human element is eliminated.

Tesla chief executive, Elon Musk disclosed that the company would enable full self-driving features on all-electric cars to help the system understand lane merging and travel even further. Mr. Musk said that the latest update would be rolled out as part of the long-awaited Tesla Version Nine.

Until now, Tesla’s software releases were entirely focused on maximizing efficiency by conveying people or items to their destinations in the safest way possible. The new software is quite a change from that order, as it prioritizes full-driving features.

Musk confirmed this saying, “To date, autopilot resources have rightly focused entirely on safety. With V9, we will begin to enable full self-driving features.”

Tesla maintains that the full self-driving functionality will help ensure “substantially greater” safety than a human driver. That is because unlike human drivers, computers won’t get distracted, fatigued, or drunk. An article on the website of The Center for Internet and Society at Stanford Law School revealed that human error is a significant contributor to around 94 percent of motor vehicle crashes.

In line with this, Tesla hopes that the yet-to-be-released software will help to overcome these challenges. Should the update roll out as planned, it will significantly boost the company’s efforts to make self-driving vehicles a reality.

Tesla’s self-driving system can conduct both short and long distance trips without the input of the individual in the driver’s seat. All the person in the driver’s seat has to do is give the vehicle an address and off they go. If the driver doesn’t instruct the car on where to go, the car will look at their calendar and convey them there. In instances where there is nothing on the schedule, the car will assume home as the default destination and take them there.

The impact of Tesla’s innovation will extend beyond self-driving features and safety, as tweets from Mr. Musk indicate that the Tesla Roadster – the organization’s most expensive electric vehicle yet – would be fitted with an improved top speed that should see it eclipse gas cars regarding performance. The company’s CEO hinted that the Roadster could go from 0 to 60 mph in just 1.9 seconds, which should see it become the quickest production car in the world.

Elon Musk, it seems, never misses an opportunity to do something beautiful. 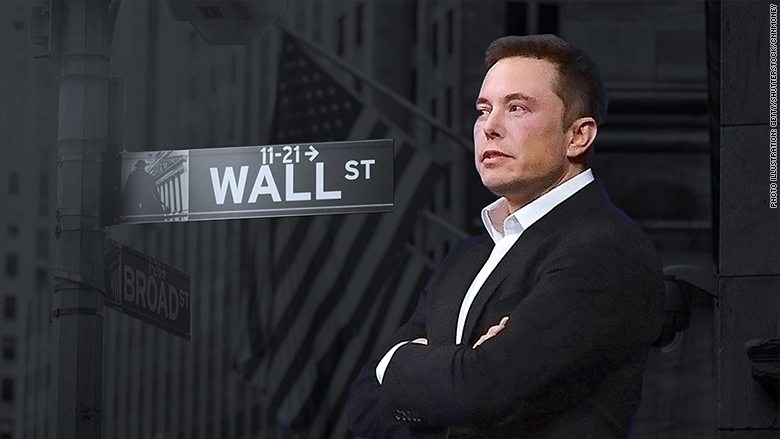 Wall-Street and Silicon-Valley have not been bed-fellows that are happy and which was on complete display this week during Tesla’s every three months earnings call. These calls are usually dull affairs, with CEOs or CFOs reading a prepared script summarizing the already-released economic results and articulating the main goals of this company that have, presumably, been stated before. Then Wall Street experts ask a few questions about the outcomes, strategies, and strategy that executives artfully dodge or clearly answer. Just like press conferences, the format doesn’t lend itself to spontaneity.

Except whenever company is Tesla as well as the Chief Executive Officer is Elon Musk. The press following this week’s call was intensely critical of Musk for dismissing questions, refusing to look into financial details, and musing about robo-Ubers and autonomous trucks that are electric into rail transportation. More than most, the call exposed the starkly different viewpoints of Wall Street therefore the valley. Musk obviously is avoiding some hard questions regarding Tesla’s monetary viability. But it’s similarly true that the phone call uncovered how limited Wall Street can be about visions money for hard times and the required steps to make new templates for doing old things.

Musk just isn’t your typical Chief Executive Officer, needless to say, with his several interlacing organizations and also his ability so far to convince investors to get along for a ride that promises the moon or perhaps Mars in the case of their SpaceX and delivers no earnings while accepting a large amount of debt. But even by those standards, his refusal to answer basic questions about, state, how much cash Tesla is burning through and also whether or not the company has an agenda to continue subsidizing and also capitalizing their expenses struck Wall Street as odd and an indicator of deep problems. Exactly what caused this call-peculiar the way Musk-dismiss sober-question was by highly regarded Wall-Street-analysts for example Toni-Sacconaghi-of -Bernstein, who pushed Musk concerning costs and also cash. Musk brushed him off, sniping that bone-head, boring questions aren’t cool. Added to the insult and injury, Musk now field another questions from the YouTube-user, who go on to control a call typically open and also only major Wall-Street. That failed to stay well with the entire Street, and Sacconaghi-lambasted-Musk the overnight on CNBC aided by the instead clever jab, This is a financial analyst call, this will be not a TED talk Friday, Musk returned fire, with tweets asserting that the concern had been boneheaded as the analyst already knew the answer and was asking purely to recommend a thesis that is negative the company.

Musk’s controversy with experts recalls the same tensions between Wall Street experts and Jeff Bezos of Amazon, Reed Hastings of Netflix, Mark Zuckerberg of Facebook and other arrogant, aggressive, and visionary technology CEOs. The experts consistently press for metrics revenue that is including profit margins, cash burn, and profits projections. The Chief Executive Officer routinely tries to stress growth, users, experience, as well as long-term vision. The experts press on expenses, competitors, cost of money; the Chief Executive Officer dodge and weave and point to approach, new models, breaking old molds, and creating new marketplaces. as well as the dance goes.

A lot of visionaries are entirely drastically wrong about their eyesight, because they are early, or outwit, or even miscalculate. Buying Tesla stock is way to risky, perhaps even ill-recommended. That doesn’t mean Musk should alter exactly what he does or how he does it. In fact, managing his enterprises to please Wall Street is an almost certain path to failure; the numbers do not mount up and won’t unless everything works nearly completely. You, but Tesla’s fate should not be up to Wall Street analysts whether you go along for the investing ride is up to